The wind farm maintenance vessel “Bibby Wavemaster Horizon” can stay on the high seas for a month. This has advantages – especially if something goes wrong.

The “Bibby Wavemaster Horizon” at the Uberseebrucke in Hamburg. PHOTO: MONIKA RÖSSIGE

Deep blue, the ship lights through the fog of the Port of Hamburg; a banner fluttering at the bow with the message: “Inaction for the climate protection! Service ship for North Sea wind farms”. Lettering and language style betrayed: Here are no Fridays for Future students at work, but advertising professionals in the large industry.

Nevertheless, the bond from the climate protests movement is obvious. And after all, indirectly, the ship can actually play a role in climate protection, because The “Bibby Wavemaster Horizon”, which made its inaugural visit to the Port of Hamburg at the end of October, is one of the most modern wind farm service vessels in the world.

Marine wind farms provide electricity for 353 days a year. In less than ten years, they could be “Europe’s biggest source of energy,” says Fatih Birol, Executive Director of the International Energy Agency. In the North Sea, a German mega wind power project is nearing completion: the wind farms “Albatros” and “Hohe See”.

Both are located about 100 kilometers from the coasts of the islands Borkum and Helgoland. The maintenance would be correspondingly expensive and time-consuming with smaller service boats that would have to run out every day. That’s why the Bibby Wavemaster Horizon was built.

Fitness room, cinema, and infirmary on board

The 90-meter long special vessel offers space for 60 people on board and can stay at sea for a month. Facilities include offices, storage rooms, a gymnasium, a cinema and a first-aid infirmary with a video assistance system to consult a specialist in real-time when needed.

The crew consists of a 20-member ship crew and up to 40 technicians: experts from EnBW and Siemens Gamesa. The energy provider from Baden-Württemberg and the German-Spanish turbine manufacturer have commissioned the construction of the ship for a mid-double-digit million-euro sum and chartered the “Bibby” for ten years.

“By the end of 2019, we want to put both parks into operation with a record total output of 609 megawatts,” said Stefan Kansy, head of new construction projects at EnBW, during the commissioning of the ship. Together, both wind farms are expected to generate around 2.5 billion kilowatt-hours of electricity per year and thus cover the consumption of around 710,000 households. According to the company, which already operates the Baltic 1 and Baltic 2 wind farms on the Baltic, this would save around 9.1 million tonnes of CO2 per year.

In a disruption, time is money

Siemens Gamesa has delivered the 7-megawatt turbines for the two North Sea Parks; A total of 87 wind turbines with a hub height of 105 meters above the water surface and a rotor diameter of 154 meters. The machine house of such a plant, in which the generator and the electrical components are located, weighs only 320 tons.

Despite these dimensions, which also meant a logistical challenge, such a system could now be safely installed and put into operation on the high seas in less than 24 hours, the company announced.

However, it will be problematic if it comes to a fault and, for example, a wind turbine fails, says Stefan Kansky. The longer it takes for experts to start servicing, the more expensive it becomes for operators because the wind turbine will not generate power over time. In such a situation service vessels have to rush to the plants as fast as possible.

And there – in the middle of the high seas – the conditions are tough. The ships must be in the wind and weather-safe next to the turbine tower in the water so that the experts can do their work. As the Bibby Wavemaster Horizon set new standards, says Friedrich Von Storch, as an engineer at EnBW responsible for the operation of the plants.

The technicians live on the ship

Key innovations include a multi-level elevator with access to a height-adjustable gangway that balances the sea. With the help of sensors and hydraulics, they dock precisely at the foundation of the wind turbine so that they can still be entered even at a wave height of 2.5 meters or more, says Von Storch.

In addition, the ship can moor at a height of nine to 26 meters at the plant and thus compensate for the strong Tidenhub the North Sea. Also noteworthy is the elevator, which allows technicians to reach the gangway directly from the storage deck. They can carry tools and equipment on a trolley right away because the gangway is wider than other service vessels.

The “Bibby” is about 90 meters long and offers accommodation for 60 people. PHOTO: PROMO

The professionals live and work on board for two weeks and then have two weeks off. They return ashore, either by helicopter or by the ship itself, which runs once a month to its homeport in Emden to bunker provisions.

Is the power supply saved by Bibby?

By better organizing the service operations at sea, the “Bibby” should also help to save costs, emphasize the operator: “Work that used to take three to four days, can now often within 24 hours through optimized processes and standardization be completed.” This saves staff costs, fuel, and CO2 emissions and reduces failures.

At the same time, there has been huge technical progress in the generation of wind power at sea over the past decades. The first offshore wind turbines were launched in 1991 with a capacity of 450 kilowatts.

By contrast, the newest turbines will have an installed capacity of ten to twelve megawatts – about twenty times as much. For example, at the end of November TÜV Nord certified a 10-megawatt turbine from Siemens Gamesa. It should be ready for the market in 2022 and would generate as much electricity per plant as 10,000 households consume per year. 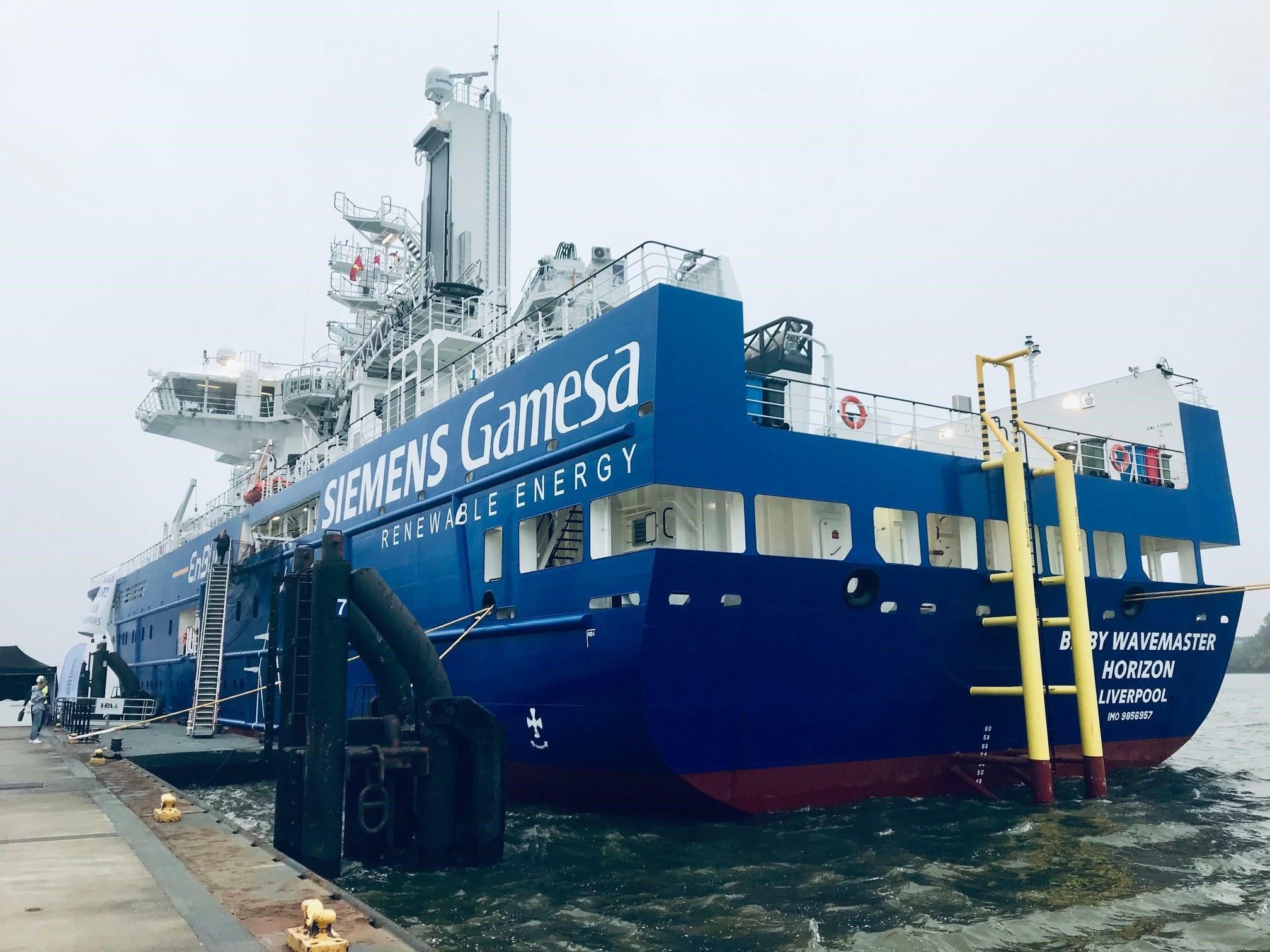