The Sardinia, a wonder in the Mediterranean that I present through my best, places that I loved last summer!
Eleven months have passed since my family trip to this wonderful island of Sardinia. Did it take me a long time to come back to you after this trip? a little yes … I let myself be taken by time and by the temptation to share with you other more recent adventures.
But I also knew that I will have many opportunities to return to this trip… my intuition was confirmed by our decision, taken a few weeks ago, to return to Sardinia again this year.

We loved the island and it is without scruples that we will soon give in to its sweetness of life. And then Sardinia is large – three times Corsica – so a second stay promises us great discoveries.
What comes back with new shots, new good addresses and a renewed desire to share with you my Sardinian love at first sight! And this time, it will be without waiting several months

For camping enthusiasts, I still disclosed the address of my accommodation on the west coast, a small campsite as we like, the Bella Sardinia. To make sure that this campsite has seduced us and that my opinion is not truncated by my partnership with Vacansoleil, I announce that we are going back there this year!
Same date, same means of transport, the ferry from Toulon with Corsica Ferries, maybe not even bungalow but we hope the same pleasure to live a week feet in the water and head in the pine forest. And of course, I will come to tell you if the Bella Sardinia, 1 year later, still keeps its promises

As for our drop off points, if last summer, we had been tempted by the west coast and the east coast, our preference naturally went to the west coast which we found much more authentic, spared by the seaside resorts of less interest to us. We will add the south which intrigues me because of its disused mines and its high white sand dunes.
And then you know our quest to avoid mass tourism… by leaving in June / July and on this side of the island, we are putting all the chances on our side.
The program will, therefore, be the Oristano region, the south with Bugerru and 2 days in the north at Porto Torres.
So, before the big departure in search of new Sardinian nuggets, little return on my inevitable in Sardinia, these essential places that took my heart.

Bosa is an explosion of colors, a village of less than 9000 inhabitants for which I had a real crush.
Located in the province of Oristano, this charming village, crossed by the Temo river (the only navigable river in Sardinia) stretches around a 12th and 13th-century castle, which offers an incredible panorama of the surroundings.
Bosa is undoubtedly one of the most beautiful sites in Sardinia and I loved its colorful houses, it’s small typically Mediterranean alleys, its wrought-iron balconies, its pretty cafes, its charming churches and its beautiful monuments…

My son loved Chateau Seravalle and his father loved the incredibly well-preserved frescoes in his chapel.
Bosa appeals to the whole family!

My advice to visit Bosa: banish the heels, climbing the castle is not done in heels of 12!

Explore the ruins of Tharros

Difficult to remain insensitive to the ancient city of Tharros, located on Cape Saint Mark, at the extreme tip of the Sinis peninsula. The environment is sublime between the green of the bushes, the waves that shake the beaches and run aground on the rocks, further away from the Cabras ponds … an incredible 360 ° view!
Tharros superbly links the blue of the sky with the blue of the sea.

The city founded by the Phoenicians a little before the 8th century BC is set on 2 hills. On the one closest to the sea, the ruins of this old commercial port, while on the second hill, you go up to climb the tower of San Giovanni which nicely overlooks the past.

If you like archeology and history, you will be delighted, the place is magic!

My advice to visit Tharros: favor the days when the temperatures are not too high because it is quickly very hot on the Roman slabs and no vegetation comes to protect the site. We took it in two steps to visit the ruins, giving up the first time as the heat was strong and preferring to return one morning early.

Be careful not to be fooled like us, the ticket for the Tharros site does not allow you to visit the San Giovanni tower. Also, my companion had to go down to the counters then go back up to the tower to allow us to finally climb to the top and enjoy the breathtaking view. Said like that, it sounds like nothing but under the Sardinian heat, it’s an ordeal;)
Last advice but that goes without saying, we forget the heels again but not the hats and the bottles of water.

If I tell you that I fell for this city completely, you will end up believing that I lack objectivity right? Which is certainly a bit true.
But without lying, Alghero is a wonder. A Catalan pearl in the heart of Italy, located in the northwest of the island.
Long populated only by Catalans from Barcelona, Valencia and the Balearic Islands who forced the few Sardinians wishing to settle in the city to learn the Catalan language until the 1960s. Little by little, Italian regained the upper hand but the Catalan origins of the city have not been lost. So much so that in Alghero, we taste paella! It is prepared not with rice but with the fregola, the little round pasta from the island, which is delicious (I brought several packs in my suitcases last summer to taste them in France).
After this little bit of history, let me tell you about the city. It is incredibly charming made of a maze of alleys that open onto lively squares. The colors are omnipresent with the yellow walls, the old pink houses, the red roofs and the blue of its natural cove.

I loved walking in this city, along the ramparts which run along the sea, enjoying the wind before losing myself in its old center tasting a platter of cold meats and then visiting all of its small churches.

If you can, take the coastal road between Bosa and Alghero, the SP 49. She is sublime.
It is a winding road – but not dangerous – which offers breathtaking panoramas on the limestone cliffs.
A must!

Surprise yourself in front of the Nuraghe Losa

The nuraghes are megalithic buildings dating from 1900 to 730 BC that are found mainly in Sardinia.
There are about 7000 on the island, some of which are extremely well preserved.
These are sets of dwellings, resembling medieval towers, made only of stones. We don’t really know their history, they could have served as temples, dwellings, meeting places …

We visited the Nuraghe Losa, which is one of the best-preserved on the island. The central tower dates from the 15th century BC and its size is very impressive, see a little with the photo of my Loulou!
There are nuraghes everywhere on the island but I really advise you to stop to visit one of the preserved sites and open to the public.
Not only do we learn a lot about the history of Sardinia but the children love it !! My Loulou was glued to the vastness of the site and the constructions.
A good idea to change the beach a bit

Cagliari is the capital of Sardinia, a sunny and sunny city that reminded me a lot of Marseille.
Built on several hills, it still bears traces of the past and has many ancient vestiges. Unfortunately, quite a few were closed without explanation – some typical Italian disorganization? – when we passed and we could not take full advantage of it.
Whatever, we took advantage of the old town and its terraces overlooking the sea.

Cagliari is a young and very lively city, it is also the place of arrival of many tourists, by air and by sea. Also, do not be surprised not to be alone but rest assured, there are plenty of ways to escape the world in a big city and out of the main arteries, you will be much quieter.

Cagliari is a city that literally flows into the sea and I really recommend that you park at the top of the city, near the castle and then descend quietly to the port. You can enjoy its pretty stairs, shaded squares, alleys with medieval accents, small churches … on the other hand, the climb, I warn you, is suddenly more sporty

Getting lost in Orgosolo and in the Sardinian countryside

Ah, Orgosolo!! Another total crush for this village located inland, in an incredible environment where animals roam in total freedom for kilometers!!

Orgosolo is the capital of Italian muralism. Do not worry, I did not know the expression either a few months ago …
In fact, almost all the walls of this small village are covered with frescoes and paintings. The first was carried out in 1969 by an anarchist collective and later, others came to complete it to honor the resistance and the liberation of Italy from Nazism.

Over the years, the frescoes have persisted and today it is a mixture of committed paintings and paintings on Sardinian culture, especially pastoral that can be found everywhere.
Orgosolo is not the only village where the mural culture takes all its meaning, others like San Sperate, Villamar and Serramanna also present beautiful works in the open air.
I won’t tell you more, I would like to devote a post entirely to the muralist culture on my return …

If you really want to know Sardinia in all its diversity, I invite you to leave the coast from time to time and sink into its land. We then approach its pastoral culture of the island which is one of its identities.
And then, we eat really well in the hinterland, at prices often much lower than along the coasts.

This day spent in the hinterland near Orgosolo was an enchantment, the landscape is really magnificent – suitable for hiking if it is not too hot – and getting lost at very low speed among the horses, cows, sheep grazing by the roadsides is a great experience.
Once again, by taking the small paths, we very quickly move away from the world which comes to visit Orgosolo – many French tourists besides – and we spent the afternoon without meeting anyone or almost.

Here are some of the places I loved in Sardinia but I could also add the Is Aruta and Sarchitu beaches, the village of Santu Lussurgiu, the charming town of Oristano … there is so much to see that I will need well over 2 stays on the island to tour it!

If you know Sardinia, do not hesitate to add in comments your essentials! 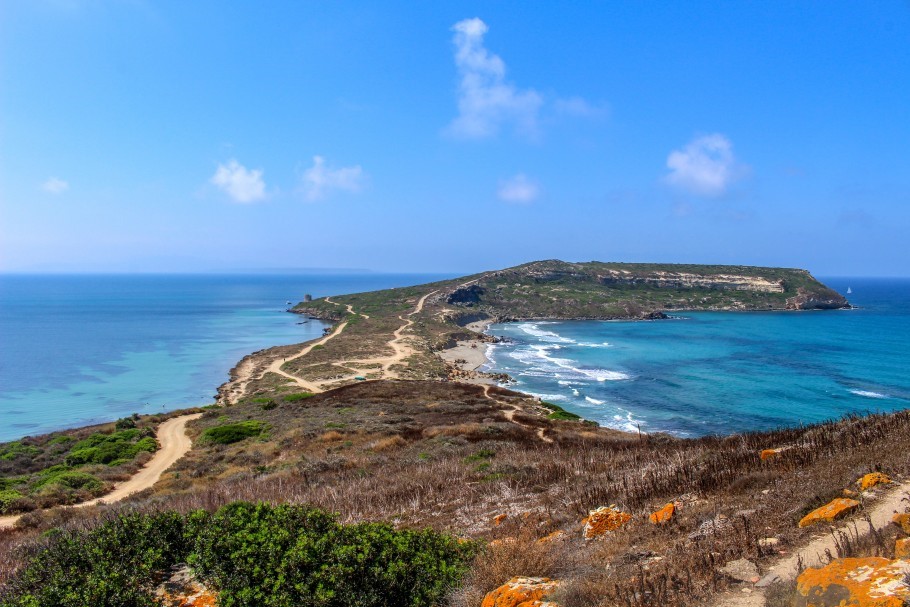